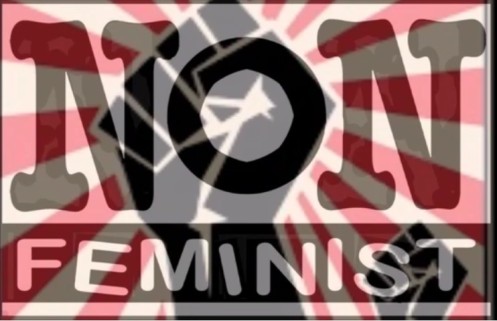 The word is out about feminism. The cat is out of the bag. The genie is out of the bottle. People in growing numbers finally understand that feminism is the problem, and they are discussing this very frankly, in ways which blaspheme the feminist narrative. These people are NOT PLEASED, and they grow steadily more unabashed about saying so.

The trend has not broken into mainstream media or conversation quite yet, but the silence shows ominous cracks. So while feminism is still a sacred idol for many, it seems only a matter of time before iconoclasts in critical numbers find the nerve to desecrate that idol with gusto, in broad daylight, in the public square.

The feminists are well aware of this development, which poses a threat to their power, their worldview, and their entire way of life. They have reason to be fearful, and what they fear most is the non-feminist breakout.

When the non-feminist breakout happens, a culture of counter-feminist critique will spill across the social terrain unstoppably and merge with the ambient of the culture at large. On that day feminism will lose, for good and all, the power of self-definition. In other words, the shoe will be on the other foot because the rest of the world will be telling feminism what feminism is.

Quite understandably, the feminists want to suppress the non-feminist breakout. We can summarize their method in a single word: containment. We might also call it isolation, encapsulation or quarantining.

Feminism defines itself as the only legitimate social order, hence endowed with a manifest destiny. So in the long run, feminism will brook no resistance to its perpetual revolution. Everything foreign to feminism is regarded as space to be either filled with feminism or made tributary to feminism in some way.

As far as feminist plans are concerned, everything which is not feminism must be reduced to feminist terms. However, the task must be prioritized for efficiency’s sake. So clearly, if you are a passive non-feminist who speaks neither good or ill about feminism, you pose no present danger to feminism and can safely be ignored until later. For now they must tend to those cheeky troublemakers who have the gall to speak their minds too freely.

Those are the ones we call the activated non-feminists. They are the shock troops of the non-feminist breakout, the threat to feminism that must be contained. The practical challenge is how to do it.

For years, the feminist way of containing the non-feminist breakout has been a trick that we call Pavlovian binding (or Pavlovian set-building). This means assembling a varied set of elements, some of which have an odious emotional charge, so that said odium will infuse itself into all of the elements irrespectively. The set is called “Pavlovian” because it triggers a conditioned response. When odious things are jumbled into the same bag with innocuous things, the innocuous things smell odious by association. Call it the stinkbug effect.

So the feminists work their Pavlonian trick by conflating “anti-feminism” (an innocuous thing) with “misogyny” (an odious thing). These are completely different things, but the feminist trick is to play loosey-goosey with that difference so that people will forget to keep tabs on it. Hence, anti-feminism and misogyny become a Pavlovian set and, in the minds of politically naive people, synonymous. Humanity en masse is prone to such conditioning.

Note that the feminists are not a bit concerned about “misogyny” for its own sake. They don’t authentically care about this as an issue. It is of interest to them only if they think they can tar their enemies with it, and the only reason they bang on about misogyny at all is to conflate it with anti-feminism. Misogyny is no threat to feminism but anti-feminism certainly is, and so it must be dealt with.

So feminist containment strategy binds all anti-feminism as a Pavlovian set, with various items loosely clumped under a misogynist or anti-feminist heading. However, only the anti-feminist part is truly under feminist attack, because only that part threatens feminism. The misogyny poses no threat and so it is not targeted. It is included in the set simply in order to taint the anti-feminist part by association. You know, the stinkbug effect.

Hence, the Pavlovian response from the politically naive public is to regard anything critical of feminism as somehow tainted by “misogyny”. That is the effect which the feminists are banking on, and they work hard to encourage it.

On the “anti-feminist” side, examples might include Warren Farrell, Janice Fiamengo, Carnell Smith, Monica Ebeling, Glenn Sacks, Erin Pizzey, Trudy Schuett, SAVE Services, Nick Reading, NCFM, Karen Straughan, Sage Gerard, Adam Kostakis, and yours truly. All of these elements are considered “anti-feminist” because they threaten the feminist power structure in some way.

The feminists also look for people or things which appear both “anti-feminist” and “misogynist”. (In their view, the AVFM website fits the bill.) This makes an intersectional segue between between the two categories, and greatly enhances the Pavlovian binding effect.

After the activated non-feminist sector has been defined as a Pavlovian set, it needs a stigmatizing label. The feminists have used several of these. “Men’s rights movement” seems to be a perennial favorite, along with “MRM”, “MRA” and even “MRA movement”. When they want an all-embracing perimeter category, “manosphere” is their word of choice. All of these terms are merely constructs, political fictions, or figures of speech – reality is more complex.

There is no qualitative difference between simple lack of feminism, and developed opposition to it. Both get in feminism’s way, and the only question is how much. To declare yourself not a feminist is to harbor a tiny seed of anti-feminism in your mind already, because it means that feminism is not your preferred option. This very decision, though seemingly non-aggressible, is oppositional at its core. Furthermore, the tiny seed is apt to grow. A non-feminist is an anti-feminist waiting to happen, and an anti-feminist is a non-feminist in a hurry.

Pavlovian binding is direct feminist aggression against all who openly oppose feminism, and indirect aggression against all who are merely not feminist. With the former, you know you’re under fire, but the latter poses a silent threat: “Keep your mouth shut or we will target YOU the same as any rapist, mass-murderer, or woman hater. If you’re not a feminist you’re a bigot!” So in the end, Pavlovian binding directly or indirectly targets ANYBODY who says no to feminism.

Inherently speaking, there is zero connection between mere lack of feminism, and any of those unsavory items listed under the “misogyny” heading. Yet according to feminist propaganda, you are mystically woven into the same fabric of moral causality with Marc Lepine simply because you are not a feminist.

Such is the libel which feminism propagates in its drive to contain the non-feminist breakout. Hence, if you are silent by reason of fear, it is a measure of their success. The fact that feminism even uses such methods, ought to make us think twice about feminism altogether. Do we really need to have it around?

For many people, it will be hard to accept that feminism is completely rotten, with nothing recuperable about it. And yet, that is the message that must eventually surface and be understood.

Putting feminism on Front Street – that’s the game! If you shut up about feminism, you are doing exactly what the feminists want you to do.

2 thoughts on “How feminism contains the non-feminist breakout”